Halloween is easily my favorite holiday! Last year we went to Disney World for Halloween and it was incredible. First off, the weather was perfect, not blazing hot and cool evenings. Here is my take on the Mickey’s Not So Scary Halloween Party. We did this on actual Halloween, which is the most expensive day but it was well worth it. 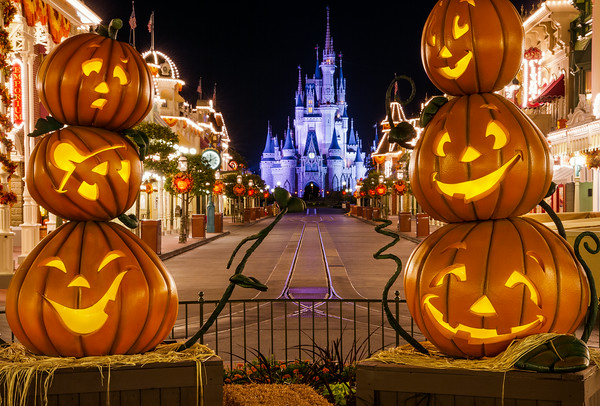 If you’re interested in buying party tickets for Halloween then the sooner the better. Tickets go on sale in May and I would buy them immediately. Halloween ALWAYS sells out and every year it’s sold out sooner and sooner, generally in August the tickets are gone. 2015 tickets are on sale now and they start at $68 for adults and $63 for children. Halloween tickets are $87 for adults and $82 for kids. With our family of 6 it cost us just over $500. Was it worth that cost? YES! Would I do it again? YES! Did my kids love it? YES!

Now this is a special event ticket so you have to purchase this separately from your park tickets. We did no parks that day and opted to hang at the pool, relax and be rested for that evening. The party starts at 7pm but Disney allows you in as early as 4pm. Take advantage of that! That gives you three extra hours to eat, ride some rides so you can enjoy all the evening events.

The biggest advantage to the Mickey’s Halloween Party is everyone is allowed to dress up! This is the only time Disney allows adults to dress in costume, so as not to confuse the kids on who is actually a Disney character or some random person in a Cinderella dress. Since this is Disney I wanted to do a Disney couple for my husband and I so we went with Beauty and the Beast. 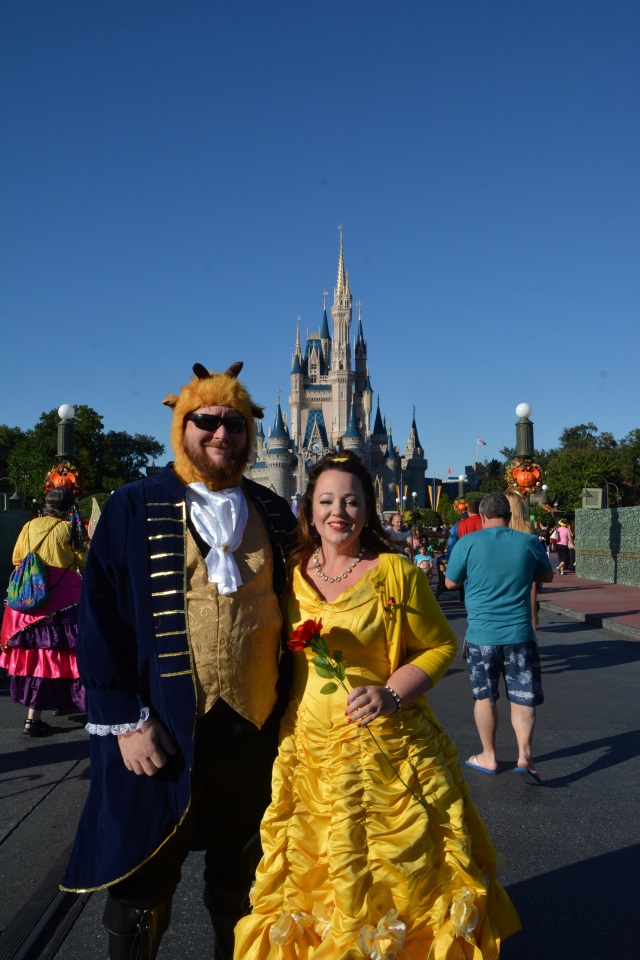 Our little girls dressed as Anna and Elsa from Frozen – big shocker there! Lol 🙂

My oldest daughter wanted to be Minnie Mouse, so I made her costume. And we recycled ears that we use every year to go with it.

Now my son, who was 9 at the time did not want to dress in “Disney” characters and since it wasn’t a battle worth fighting, he picked Batman.

We arrived right at 4pm so we could get all our photos taken and get that out of the way. At this time a lot of people were starting to leave the park since it closes to the general public at 7pm and we wowed a lot of people with our costumes. But our costumes were by no means crazy big or thrilling, not compared to some of the other costumes people wore. That’s one of the best things is watching all the people in their costumes from all different varieties. People are truly creative with their costumes and there are a lot of family costumes. It was truly incredible and fun to see. There was a lot of finger pointing and “look at that!!” I would say 90% of everyone is dressed up.

Here is the 2014 brochure of events and how things are timed out: 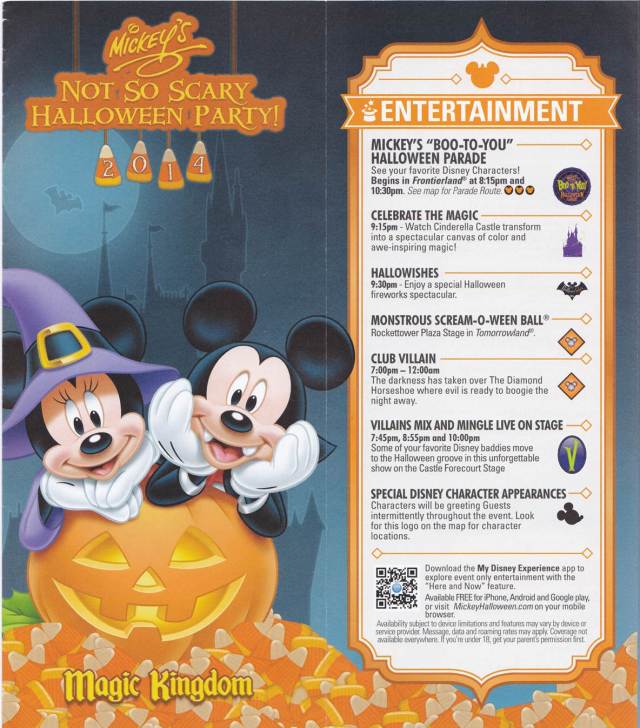 My kids did almost everything and loved it all. The dance party was cute and they give the kids candy for participating. It’s basically a bunch of characters dancing in the street with the kids.

One attraction you can’t miss is going on the Haunted Mansion. How can you not do that on Halloween? The wait for that ride is 60-90 minutes which is a lot. You CAN get fastpasses but only from 4pm to 6:30pm so that’s why it’s good to get their soon. There are NO fastpasses after 7pm. I had fastpasses for 5:00pm, so we were able to take our pictures and get to the back of the park to use those passes in that first hour. We waited about 15 minutes with the fastpasses versus 90 minutes. I don’t think I would wait that long and waste so much time. Whether you ride it or not they do some fun pictures in front of it. 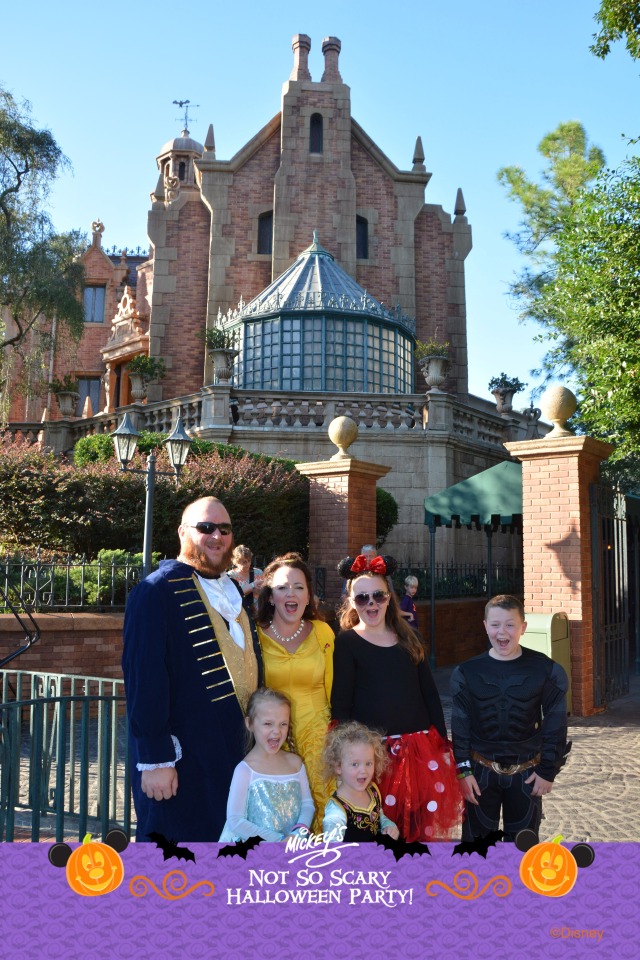 There is trick-or-treating set up throughout the park and is highlighted on your party brochure. So we get in this long line and we’re standing there about ten minutes and it’s a long long line but it’s moving fast and I’m wondering if it’s worth waiting 15 minutes to get a piece of candy but then you get to the candy and realize that there are SEVERAL Disney employees with barrels of different kinds of candy and they give you fist fulls. So one stop and half your bag is nearly full. My kids did about four candy stops and it took about 30 minutes – they had so much candy it would have taken several hours of trick or treating in the neighborhood. Some people don’t believe you should waste time getting candy at the party but when you have kids they still want to have that traditional Halloween trick or treating and it was worth it. And the candy is the best. Good, good candy. Not crap! Lol

There are a lot of characters stationed throughout the park. My kids were not into all the villain meet and greets that are offered but we did stand in line for Captain Jack Sparrow which is my husband’s favorite! It made his night!

We did take advantage of a shorter line to see Cinderella too.

There are two times to see the parade and it’s worth seeing both times! One of the number one things people enjoy about this party is seeing the headless horseman start the parade but galloping through the streets. It is incredible! 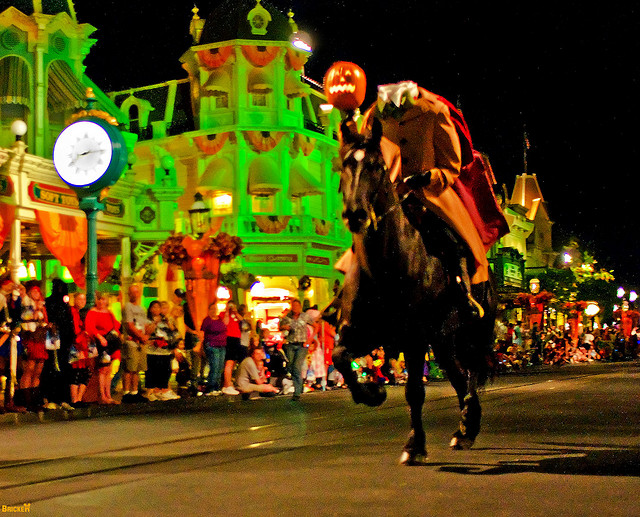 The parade features some interesting villains, a Haunted Mansion float and performances. I loved the grave diggers dancing with shovels that sparked on the street as they danced. 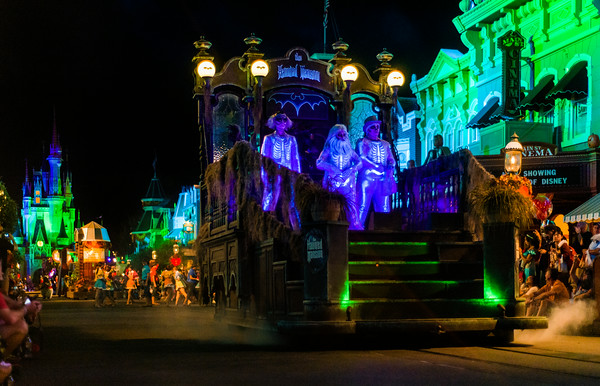 Just like traditional evenings at Disney they have the traditional Celebrate the Magic at the castle and then fireworks. Fireworks are Halloween colors and a little different then the normal evenings.

I highly recommend this special event at Disney World. I think it completely justifies the price and it’s something our family hopes to do again in the future. We have the most amazing pictures. We did buy the Photo Pass for $149 which allows you to keep all your photos plus all ride photos, which is very worth the price. It took the stress out of always trying to get the perfect shot. When my kids were meeting characters I could enjoy the experience with them instead of spending all my time taking pictures.

Our family stayed till the very end of the party which is midnight.

We made some incredible memories that night. I’m not sure Halloween will be the same this year. It’s a little hard to compete with Halloween at Disney! 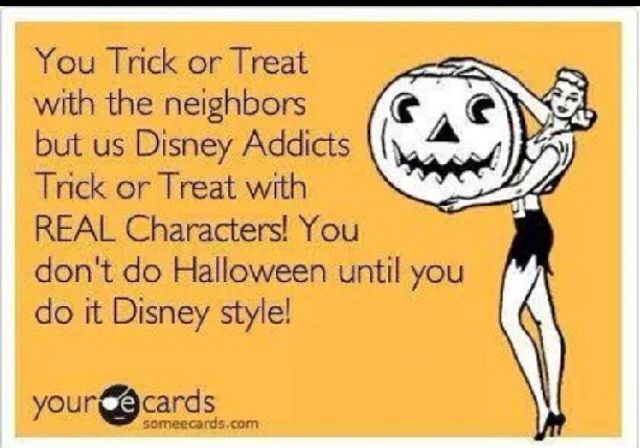